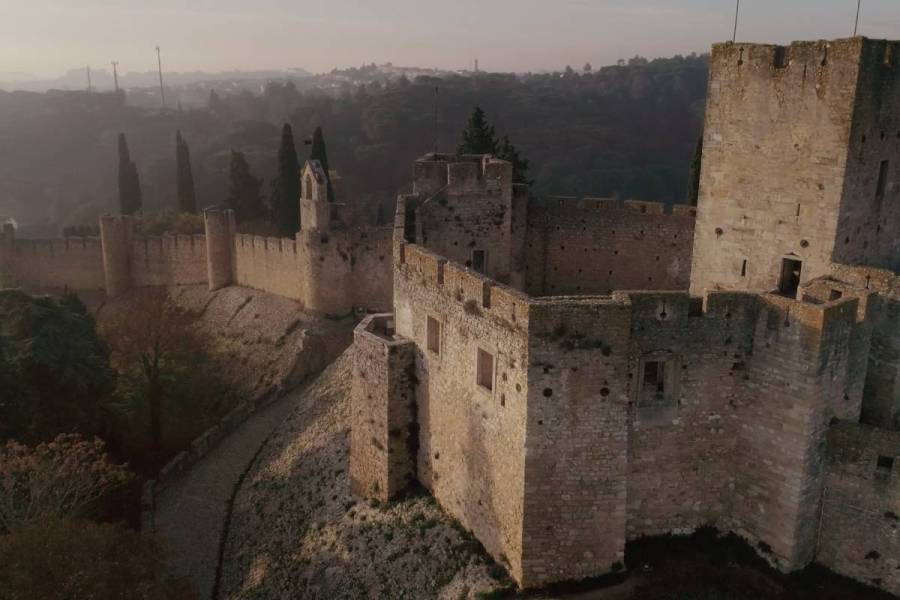 In Jerusalem, in 1120, the most fascinating and mysterious religious and military order of the Middle Ages was born: The Templars. These brother knights who stemmed from several European countries quickly spread and their convents soon became a vast network stretching from Portugal to Poland, from Scotland to Sicily, and, in the East newly conquered by the Crusaders, from Antioch to Gaza.

While popular history remembers the Eastern fortresses, where the Knights Templar carried out their mission to defend pilgrims and protect the Holy Land, less is known about their activity as builders in the West. It is however remarkable in its architecture and offers a wealth of information on the history and life of these soldier monks.

Two impressive, fortified castles marked their military presence in Spain and Portugal, bringing back from the Crusades innovative techniques that were still unheard of in European military architecture.

Tomar Castle is surrounded by an astounding glacis, a steep, bare slope encircling the 700 meters of ramparts. Erected on a colossal construction site, it is the largest Templar glacis in all of Portugal. This great crown of stones, measuring between 7 and 8 meters in height as in width, is an extremely efficient protection against sapping and mining, techniques that were used by Muslim troops to bring down the walls of the castles they besieged. In addition to the glacis, its 20-meter keep is void of doors on the ground level, providing an ultimate defense against attackers. With such features, Tomar was able to withstand the siege of the formidable Almohad army in 1190.

The fortress of Miravet in Spain is just as impressive. It is characterized by its large terrace roofs of 27 meters in height, on which siege engines of unequalled destructive power could be set. Ironically, this fortress was never attacked by Muslim armies but besieged by other Christians instead! In 1312, the Order of the Knights Templar was sentenced by Pope Clement V and the armies of the King of Aragon arrested their members in Miravet.

In Paris, the Templars shaped a significant part of the face of the capital. Back in their heyday, they became the second largest landowners in the city, trailing only the mighty Bishop. They designed the street of the Marais district  and built an entire little city within the city, surrounded by fortifications. As a symbol of the power, they also erected a 45-meter keep, the second highest building in Paris after the spires of Notre-Dame Cathedral. Thanks to 3D reconstructions, you will discover this neighborhood that is completely gone today.

In London still stands Temple Church, genuine jewel of religious architecture religieuse. There, the current temple master continues to celebrate Mass in the same way that Templars did in the 13th century. Everything pertaining to the construction of this church reminds of the Church of the Holy Sepulchre in Jerusalem, the very origin of the Templars’ power.

Thanks to the most recent archeological research, spectacular 3D reconstruction, and the testimonies of the greatest international experts, we will reveal the secret techniques of the Knight Templars, these genius builders whose stones attest to their unbelievable power to this day.