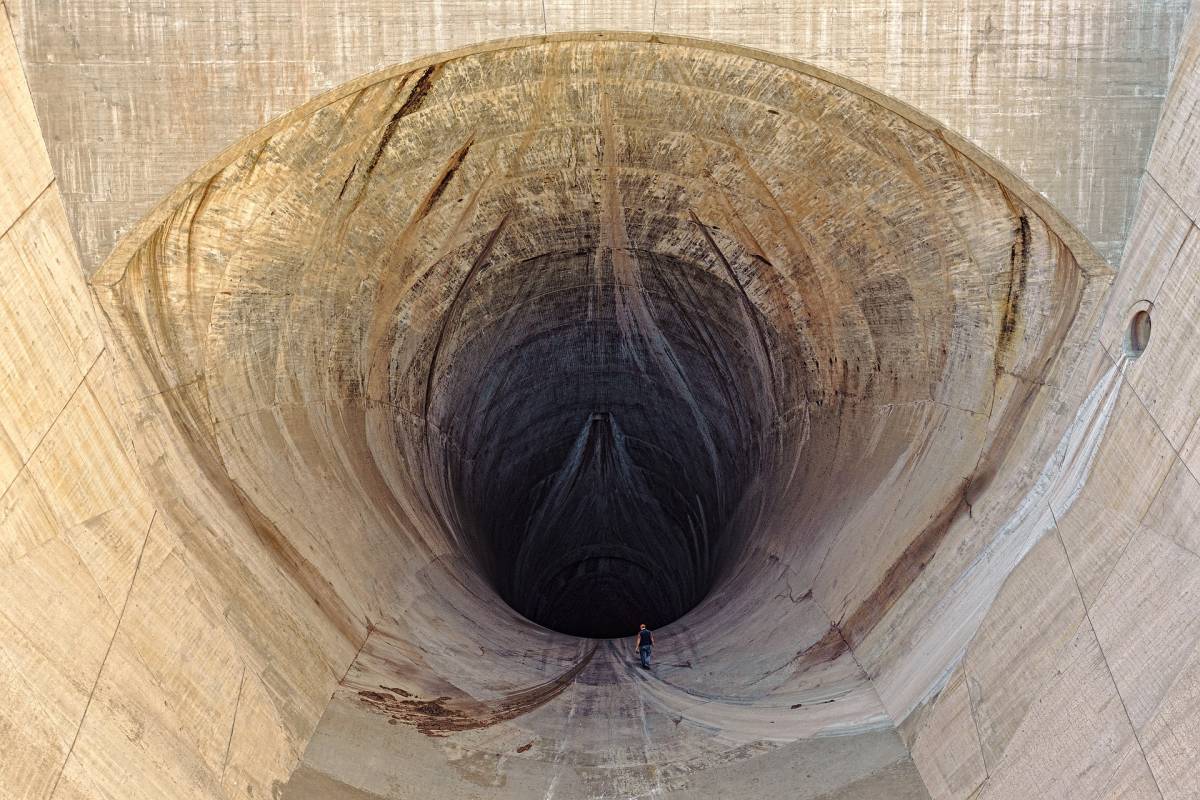 The Hoover dam, located across the Colorado River in the United States, on the border between Arizona and Nevada, is one of the biggest dams in the world: 200 meters at its base, 220 meters tall and 380 meters large. The structure is taller than the Giza pyramid in Egypt.

During its construction, it required the largest quantity of concrete ever poured: more than 3 billion cubic meters. As much concrete needed to build a highway linking New York to San Francisco!

Quite simply one of the wonders of the 20th century industrial world, an extraordinary feat thanks to ambitious techniques and aesthetics.

It was built between 1931 and 1936, during the Great Depression, dedicated and inaugurated on September 30, 1935, by President Franklin Delano Roosevelt, who believed it to be a great project capable of taking on major challenges. The construction of this huge work of art not only provided jobs when American society was crippled by unemployment but also aimed to hold back the Colorado River, control floods which were torrential back then, stock water to irrigate arid land and provide electricity to neighboring states.

However, the first challenge was the construction per se, taking place in hellish conditions: in the middle of the desert, the first year had temperatures rise to 49 degrees in June…at the time, a worker died every other day. The required labor effort was considerable. Thousands of workers dug the tunnels by hand, to drain the construction area meant to accommodate the dam. The rock faces of the canyon were filed smooth by the same workers: steeplejacks dangled in thin air, equipped with jackhammers, chisels and dynamite.

To take on the unprecedented challenges of this project, Franck Crowe. A man with an iron will who has the ambition to meet the 7-year deadline, to avoid late delivery compensations. To do so, he invented a revolutionary machine: the Jumbo Rig, a drilling rig upon which 50 workers with jackhammers drilled, dynamited and cleared debris. As human casualties were too high during the initial works in Ragtown (the makeshift slum built by the workers), he created Boulder City, a new type of company town which, despite its delays, ultimately helped the construction site to go on with its hellish pace.

But the engineers had to face challenges that were unheard-of. What shape to choose for a dam meant to resist the pressure of a river as powerful as that of the Colorado? What construction technique to select? Bearing in mind that to build a 244 meter long “plug” between both faces of the Black canyon, the amount of required concrete was unprecedented.

But when the ingredients to make concrete are mixed, they created a chemical reaction which produced heat and calories that had to be evacuated. The heat of the desert also factoring in means that to cool down the huge quantity of required concrete, the drying out period would have amounted to over a century.

As the water was released in 1935, those involved shared a feeling of anguish. It was the biggest dam ever conceived, but proceedings carried out according to plan. Gradually, Lake Mead formed over 177 km. It was the largest reservoir of the United States, a success, as the water flowed towards the 17 generators, rotating the turbines at 180 rotations per minute and 160 km/h.

By producing pressure, the water generated clean energy, and the river started to irrigate more than 1 million acres downstream.

Thanks to the Hoover dam, casinos in Las Vegas gained spectacular growth and the city of Phoenix expanded swiftly.

The dam can produce electricity for close to 2 million inhabitants at a capacity of 2080 megawatts. Las Vegas, its hotels and its strip are 50% dependent on the Hoover dam.

But many challenges lie ahead for Hoover Dam. Lake Mead is drying out considerably due to global warming. Furthermore, invasive species, little muscles, have proliferated, and are currently clogging the pipes of the power plant before colonizing the generators, thus preventing it to function at full capacity. As a result, Hoover Dam is producing less electricity, year after year. Its latest challenge is its survival.

Thanks to a breathtaking narration, 3D reconstitutions and interviews led by experts, the 52 minute-long documentary will help you fully comprehend the many challenges of a dam with an amazing destiny.