Neanderthals vs Sapiens: Two of a Kind 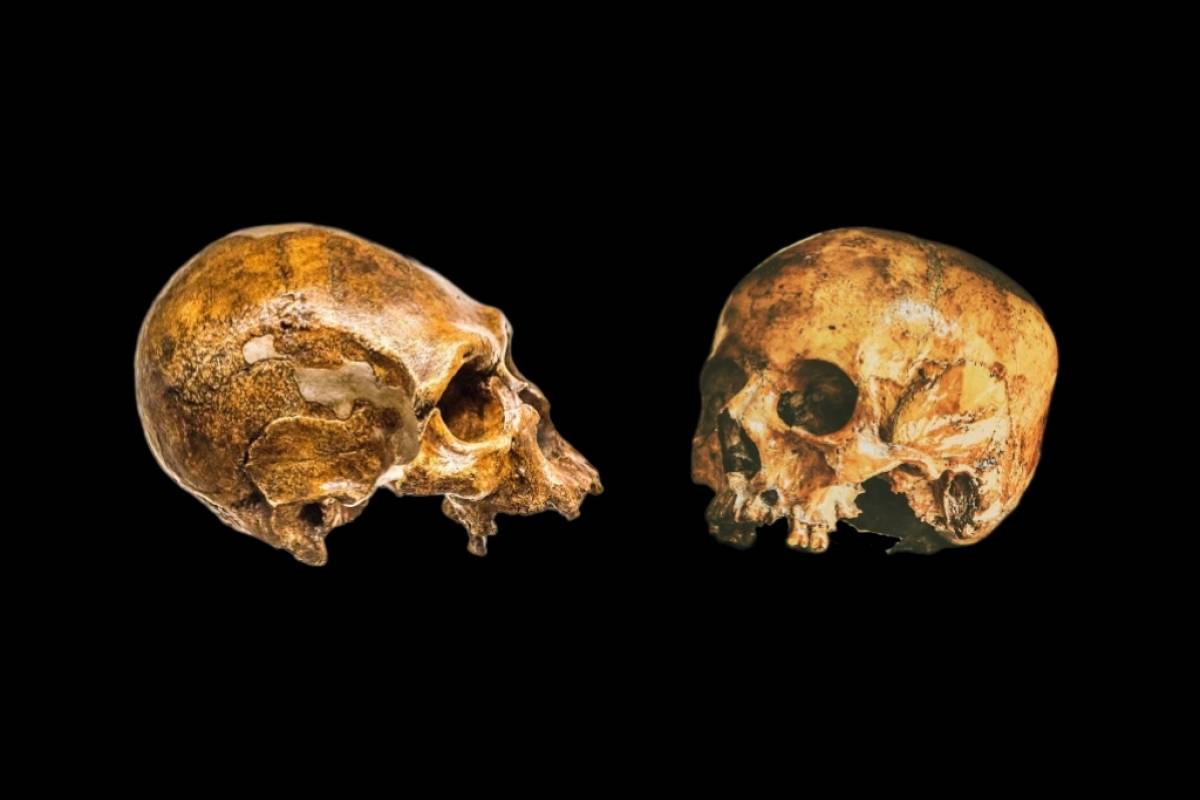 In February 2022 a major archeological discovery turned the story of our origins upside down. On the Grotte Mandrin site in Drôme, southeastern France, Ludovic Slimak’s team showed that Homo Sapiens arrived in Europe much earlier than formerly known, at least 54,000 years ago. Up to know, we thought that the first Sapiens in Europe almost coincided with the Neanderthal extinction, estimated to have occurred less than 30,000 years ago. Today we learn that both species rubbed shoulders with one another, here, for almost 15,000 years, with interactions that we can only just start to imagine.During these last few years, revelations on Neanderthal kept emerging, showing a much closer link to us than previously established.  However, Neanderthal disappeared and us Sapiens survived and even conquered the planet, for better and for worse. So what are the differences between both our species that can explain the predominance of Sapiens.

The first comparative study will focus on the skeletons and general morphologies of Neanderthal and Sapiens, who will be brought back to life via CGI. Neanderthal seems to present superior muscular strength to that of Sapiens, a stocky aspect giving him a long standing reputation of being a thick brute. However, his physique actually helped him adapt to cold weather. Contrary to popular belief, analysis of his teeth shows an omnivorous diet and the consumption of medicinal herbs, like Sapiens. Moreover, the virtual reconstitution of the Neanderthal larynx proves that he was also able to use language. While morphological differences tend to give an advantage to Neanderthal, maybe Sapiens owes the secret of his survival to his intelligence? But again, we discover that Neanderthal had superior cranial volume to that of Sapiens and his tools, which were reproduced and tested by archeologists, seem equally efficient on a technical level. Furthermore, in 2020 at the Abris du Maras site, archeologists exhumed the oldest cord ever discovered, complex weaving technology that could well be a Neanderthal feat. This extreme proximity between Sapiens and Neanderthal is confirmed by genetics, beyond anything we could have imagined. In 2010, after a scientific adventure that resembled an odyssey, scientists managed to decode the entire Neanderthal genome, 99,7% identical to that of Sapiens. What’s more, the same team showed that most of us have Neanderthal genes, The figures are very low in Africa but amount to 1 to 4% in Europe and Asia. For 40,000 to 80,000 years, Neanderthal interbred with Sapiens very frequently, questioning the idea that we belong to 2 very different species. Therefore, how can one explain the radically opposed destinies of 2 human species, so similar that they interbred for thousands of years?

Today, thanks to virtual modeling, the French National Centre for Scientific Research rules out many wrong theories related to the disappearance of Neanderthal and boils it down to one main reason: a continuous drop in fertility over many generations, eventually resulting in extinction. But why did the fertility decline impact Neanderthal and not Sapiens? Again, it is through comparison that we will discover a decisive clue. The imprint left by the brain on fossil skulls allows us today to make virtual moldings showing that Sapiens and Neanderthal brains did not have the same structure and indicating a much more developed cerebellum for Sapiens. Both did not think alike! With a larger cerebellum and eyebrows with more mobility – as opposed to the typical bulges of Neanderthal – Sapiens may have been physiologically better equipped for communication and sociability. This allowed him to evolve within higher developed social groups, as corroborated by archeology which shows that Sapiens traded with tribes located thousands of kilometers away from his own habitat.  Unlike Neanderthal who may have evolved within much smaller tribes, which would have led to consanguinity and eventually population decline.

Finally, another major difference in Sapiens’ thought process gained him a clear advantage in his evolutionary success. When comparing tools and weapons produced by Sapiens and Neanderthal, it is clear that Sapiens was the champion of standardization and serial production, a less creative behavior but a more efficient one, which appears to have evolved into a characteristic trait of the modern man.

Thanks to 3D modeling and interviews with the best experts in the world, dive back into the secrets of our origins and discover what the latest scientific research has to say about humanity.